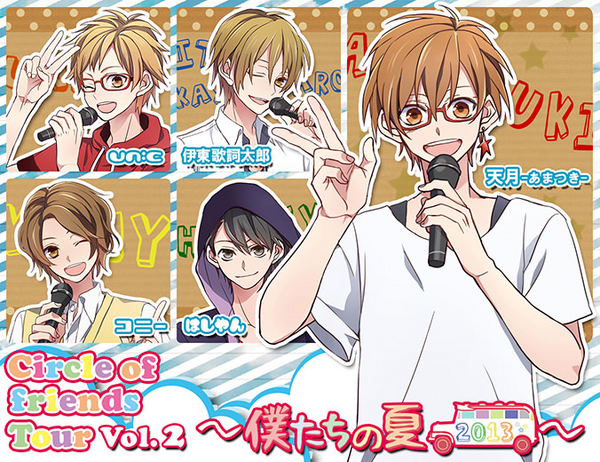 Circle of Friends conducts bus tours throughout Japan. Guest members for the first tour included nero, Yuuto, Aho no Sakata, un:c, Mafumafu and Yurin; un:c becoming a full-time member shortly afterwards. Guest members for the second tour (in addition to the guests from the first tour, who have all confirmed to be returning for the second) include Rib, Rumdarjun, Natsushiro Takaaki, and Soraru.

The concept of "Circle of Friends" started during a namahousou of Amatsuki and Hashiyan, when Amatsuki said that he wanted to do a tour with his friends. It was assumed that it was a joke, but he was taken quite seriously by the watchers.

A
C
H
I
K
U
Retrieved from "https://utaite.fandom.com/wiki/Category:Circle_of_Friends?oldid=174140"
Community content is available under CC-BY-SA unless otherwise noted.