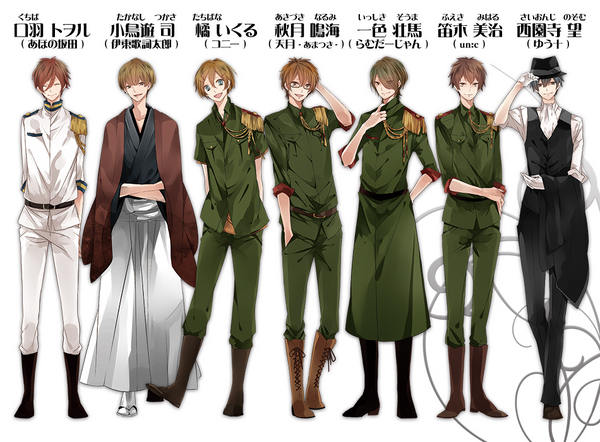 Teito Hanayoi (帝都華宵) is a group, that frequently does lives and releases radio drama CDs.

The story is set in the Taishou era, with a group of students from an imperial army school, called "Teito Rikugunhei Gakkou" (帝都陸軍兵学校). However, due to the western influence, music, theatre, painting and literature became a popular culture. Every year, the school will hold a "Teito Hanayoi Opera" on the Sunday nearest to the day of Tanabata.

A few years since then, due to the depression during the World War, the society was thrown into insecurity and stagnancy.

Because of this, the hot-hearted and honest young man who loves music more than anyone else, Akizuki Narumi (秋月鳴海) and the young man who is trying to find a song to stop the war, Tachibana Ikuru (橘いくる), along with their clumsy friend who has the heart of a samurai, Takanashi Tsukasa (小鳥遊司), will depict their roads to adulthood with wavering hearts through dramas.

A
H
I
K
R
T
U
Y
Retrieved from "https://utaite.fandom.com/wiki/Category:Teito_Hanayoi?oldid=175153"
Community content is available under CC-BY-SA unless otherwise noted.